I want to talk about a change that I recently made in my computing environment which has significantly improved my productivity and happiness. It’s a little program called Cold Turkey and it’s reined in my Internet addiction.

Cold Turkey can block sites or applications on a timer or a schedule. Once a Cold Turkey block has begun, it is prohibitively difficult to disable. This is what makes it so effective.

Cold Turkey is available for OSX and Windows, for both the super-users and the noobcakes (respectively). I am not affiliated.

Curbing internet usage should be a high priority for us digital humanoids. The constant dopamine hits we’re getting are only serving to make life more dull and less of a joy to live. I can testify that Cold Turkey is good at what it does by the fact that mundane, day-to-day experiences are fun now. It reminds me of being a kid.

How I Use Cold Turkey

Cold Turkey lets you set block lists to specify apps and websites which are problematic for you. Then you initiate a timer for some amount of time, which can be done from either the main window or from the menu bar (on OSX). Once a block is in effect, any apps and websites on the block list will be utterly inaccessible for the duration of the block.

Alternatively, with the paid version you can set up a schedule, which is more foolproof as it kicks in automatically without your involvement. This is the only way I initiate Cold Turkey sessions. Unfortunately, setting up a schedule can take a while, and there isn’t any way to copy days. I suspect this may be intentional, as it’s hard to modify your schedule right before a block takes effect and “cheat” that way.

My advice is to populate your block list with all your big time-wasting distractions, then to set a schedule that enacts this block every day for most of the day. I only allow myself an hour of pointless Redditing a day, but I found that I use it less than that now that my compulsion to visit pointless sites is gone. 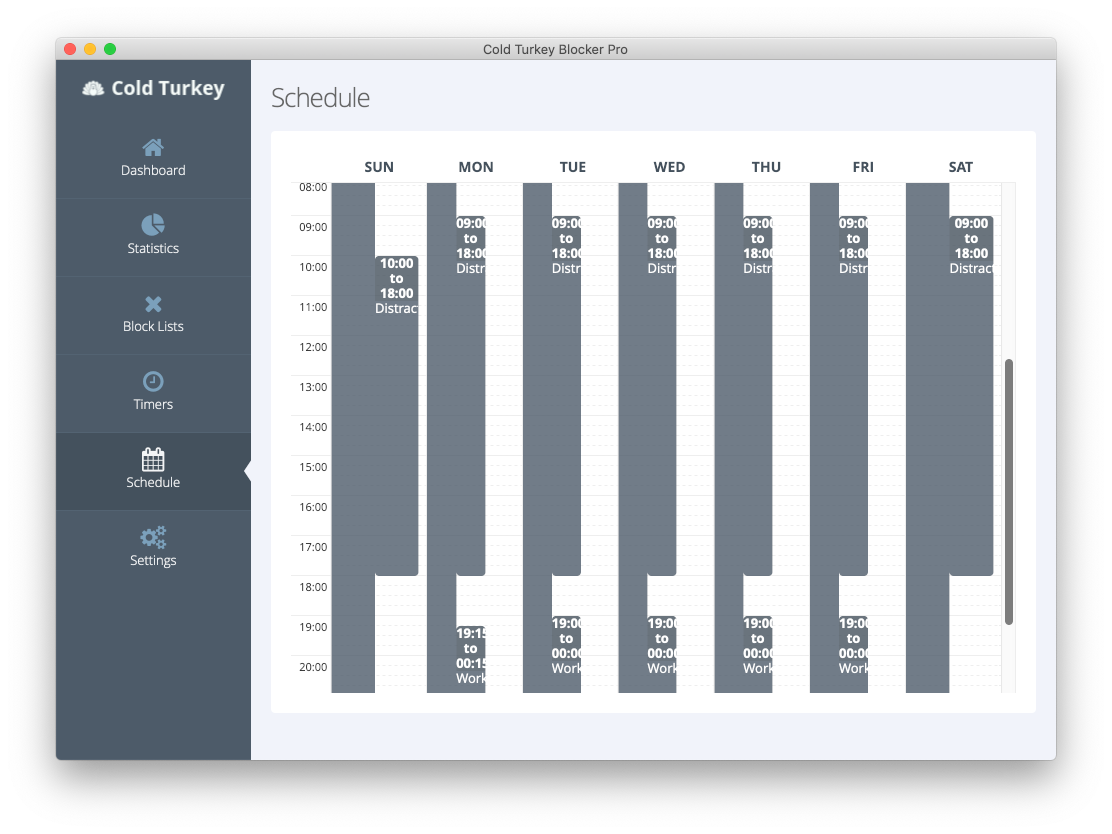 My Cold Turkey schedule. Distractions are blocked during work hours; work is blocked after work hours.

What if you have some legitimate need to visit a time-wasting site? For example, as a Rust programmer, I tend to end up on the Rust subreddit, but Reddit is on my block list! What to do? Well, in these scenarios you can specify an exception in the block list.

The first few days with Cold Turkey installed were not easy. Whenever I was waiting on code to compile I would get tempted to head over to Hacker News or Reddit and make some thoughtful comments or shitposts (respectively). The problem is that I would start surfing through the interesting articles and unfunny memes (respectively) and that would usually last longer than the compilation cycle itself.

With Cold Turkey installed, this dopamine-seeking, largely automatic behavior was denied to me. It felt pretty bad, and it was the first time I realized, thanks to Cold Turkey, that I had gotten addicted to mindless surfing. But the initial pain period has subsided and I have better habits that are bringing good results and satisfaction.

Here are some more useful things to be doing than checking social media:

Cold Turkey also tracks your frequently-used apps and sites! It can be a useful feature to find out exactly how you’re wasting time on the computer.

Cold Turkey’s statistics are not perfect – it thought I spent several hours on a site that I only looked at for a couple minutes. In general, though, it’s pretty good at providing a data-based overview of your computing habits.

Another bonus?! This is probably the best Cold Turkey feature and it’s the one that convinced me to fork over the money. You have the option in the schedule to specify Frozen Turkey blocks, times when Cold Turkey should freeze your computer. It’s pretty useful for those of us who have a hard time getting off the computer when we should be doing things like sleeping.

I no longer use this feature because it seems rather buggy.

There are several free (and even open-source) alternatives to Cold Turkey such as Self Control. I found them to be limited in effectiveness. If anyone knows of a free program which is comparable to Cold Turkey, do let me know.

Getting The Most Out Of Anki ⇢